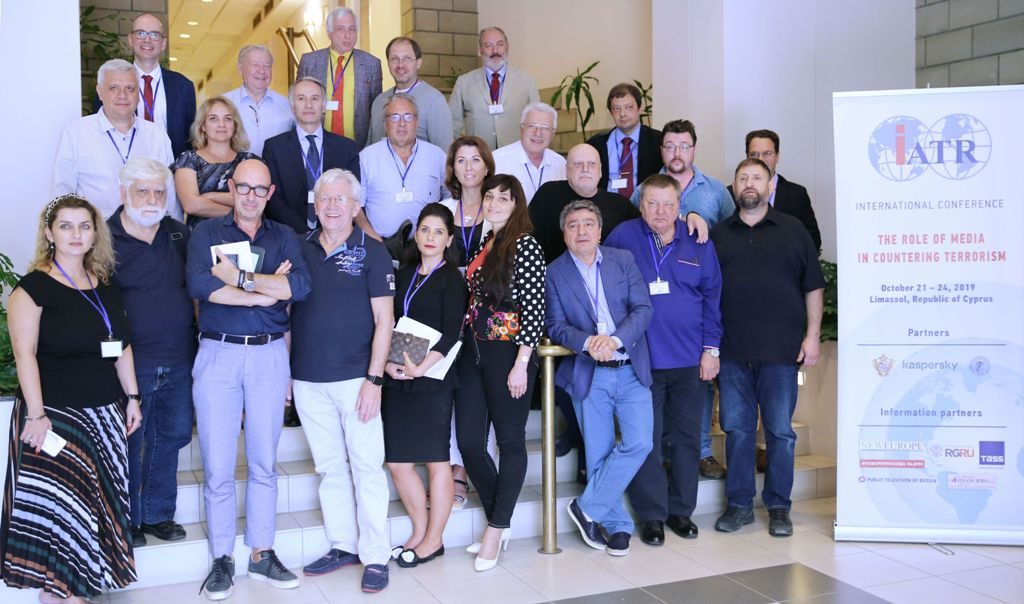 INTERNATIONAL CONFERENCE THE ROLE OF MEDIA IN COUNTERING TERRORISM

Annual International Conference on the Role of Media in Countering Terrorism completed its work on 24 October 2019 in Cyprus (Limassol).

This Conference was held for the fifteenth time and during the last 15 years it has managed to attract to its discussion platform a number of well-known journalists and professionals in mass media, scientists and recognised experts from Russia and many other countries.

The main objective of the Conference was to attract attention of media community as well as interested national governmental and non-governmental organisations to the problems of countering terrorism via electronic media.

Mr Vladimir Kozlov, a co-Chairman of the organisational committee of the Conference and Deputy Head of the Federal Agency for Press and Mass Communications, Leonid Mlechin, Chairman of the Board of International Academy of Television and Radio and Director of the Department of History and Public programs of the Public Television of Russia, Stanislav Osadchiy, Ambassador of the Russian Federation in the Republic of Cyprus as well as  George Frangos, President of the Union of Journalists of Cyprus spoke during the opening session of the Conference.

George Frangos read out the greetings of the President of the Republic of Cyprus Nicos Anastasiades.

Russian Ambassador Stanislav Osadchiy in his address noted that in the modern world “social networks are used to trigger all coloured revolutions and mass riots, while terrorist attacks are broadcasted online and collect millions of viewings on popular video resources”.  With that in mind, the Cyprus conference assumes a paramount significance.

Vladimir Kozlov said for the 15th time this Conference is dedicated to the same topic, however, unfortunately, it remains relevant.

Leonid Mlechin believes that currently mass media still play the key role in forming public opinion.  «Nevertheless, terrorists start playing on our field  – earlier they had to attract attention of media in order to disseminate information on a terrorist attack, now they are coping with this task by themselves».

Famous Russian and foreign journalists, scientists, experts, representatives of special services and international and non-government organisations representatives from Belgium, Greece, Israel, Italy, Cyprus and Russia participated in the Conference in 2019.

The discussions were held during six sessions of round tables. Conference participants tried to answer the following questions: How professional journalism can maintain confidence of their audience in the era of fake news? How to use resources of bloggers and youtubers in fighting terrorism and hate speech? Are there any ways of cooperation between media, diplomats and security agencies of various countries in countering terrorism?

Many participants believe that at present the main task of international community of journalists is to develop intellectual approach for countering terrorism.

Andrey Yarnykh, Head of Strategic Projects of Kaspersky Lab in his presentation vividly demonstrated the vulnerability of modern digital civilisation and spoke about the need for cyber security on every level.

During the Final plenary session Vladimir Kozlov and Leonid Mlechin summed up the main results of the Conference discussions. They reminded to the participants about the invitation of Cyprus President Nicos Anastasiades to organise the following Conference in 2020 in Cyprus.

At closure of the Conference its participants adopted the Final Document.

The Conference was organised by the International Academy of Television and Radio (IATR) with support of the Federal Agency for Press and Mass Communications of the Russian Federation and the Union of Journalists of Cyprus.